In rural Uganda, ambulances made with bicycles and electric scooters are giving more people access to health care. 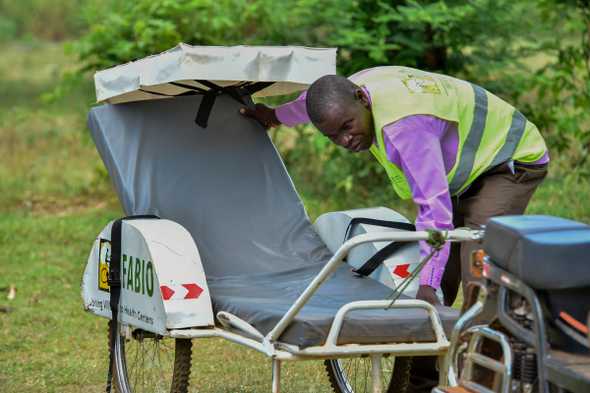 The ambulances are managed by village health teams chosen from within the community. The teams distribute contact numbers so people in need can request the service. NICHOLAS BAMULANZEKI/AL JAZEERA

Kibibi, Uganda - In the early months of her pregnancy, Sandra Naigaga had to walk more than four kilometres to get to antenatal care at the health centre in Kibibi, Uganda.

Uganda has high maternal and newborn death rates, with 15 women dying every day from childbirth and pregnancy-related issues. That worried Naigaga in those initial months of pregnancy.

That fear however subsided in late 2018 when the NGO First African Bicycle Information Organization (FABIO) introduced its free bicycle ambulance service to the two major health centres in the region.

Naigaga is one of the hundreds of women, elderly persons, children and the sick in her area who regularly use bicycle ambulances to get prompt medical attention.

In many remote areas, many of the roads are impassable for vehicles, so the bicycles with their specialised trailers to carry patients are the only way for many to get to a health centre.

"As pregnant women, we are always weak," says Naigaga, "They take us to hospital, we get treatment and they take us back home."

In Uganda, 77 of the country’s 121 districts lack an ambulance service and fewer than 7% of patients arrive at hospital by ambulance.

That lack of transport prompted FABIO to develop its first bicycle ambulance service in 2006 in Uganda's then war-torn northern region.

Their goal since has been to create something that is both environmentally friendly and easy to maintain.

"We wanted to create a sustainable way or a cheaper way for people to be able to access health centres," says executive director, Katesi Najjiba.

The ambulances are built by locals, with locally sourced materials, using as a base the black bicycle whose spare parts are easily found in the villages.

Some terrain can be challenging for the cyclists.

"The hilly areas are most times not easy for me to go pick the patients," says Mukasa Harid, a bicycle ambulance cyclist. "It's only possible when one helps me push it and we manage."

To address that concern, FABIO introduced the e-scooter, a rechargeable electric bike used in place of bicycles in areas where the terrain is hardened like the region around the Kibibi health centre. 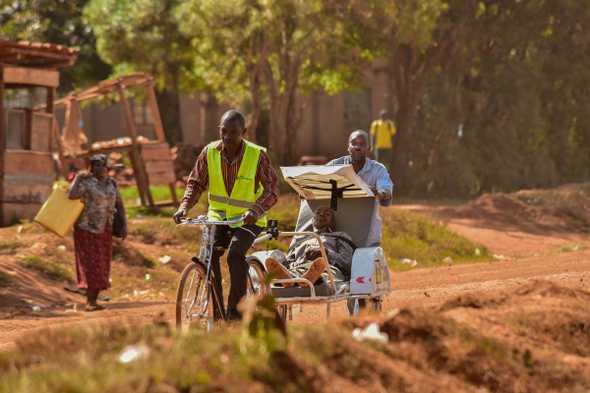 The bicycle ambulance service operates in areas where cars can not travel, with local workers ferrying people to health centres. NICHOLAS BAMULANZEKI/AL JAZEERA 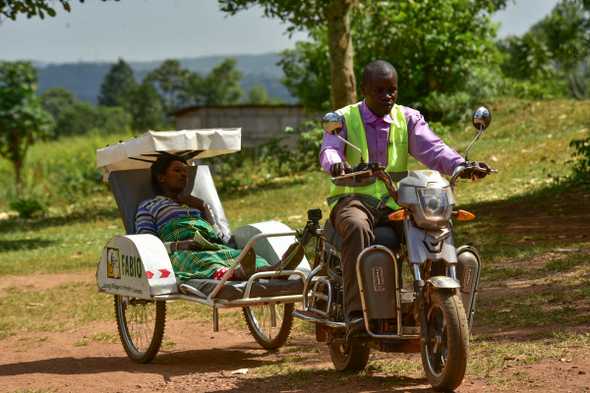 Where the terrain is hilly, the ambulances use rechargeable electric cycles. Pregnant women like Sandra Naigaga, who used to walk kilometres for care can now use the service. NICHOLAS BAMULANZEKI/AL JAZEERA 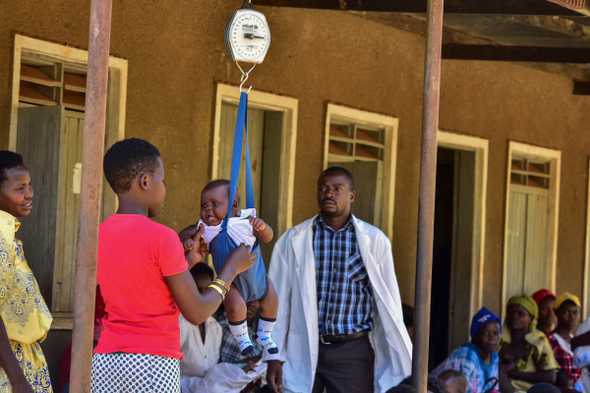 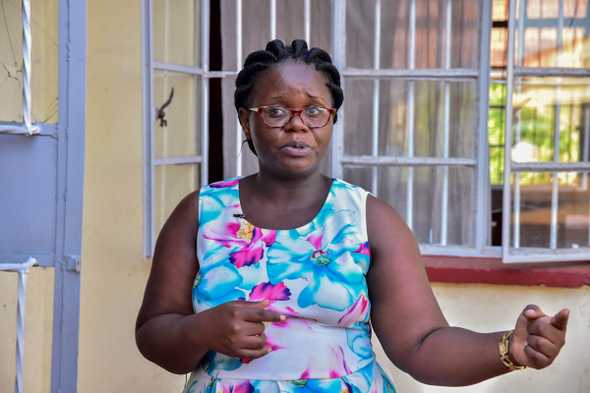 '[The] majority of the women, even pregnant women, have to walk to get access to health centres. Some of them are dying along the way so we wanted to reduce the death toll among pregnant women,' says Katesi Najjiba, executive director of FABIO. NICHOLAS BAMULANZEKI/AL JAZEERA 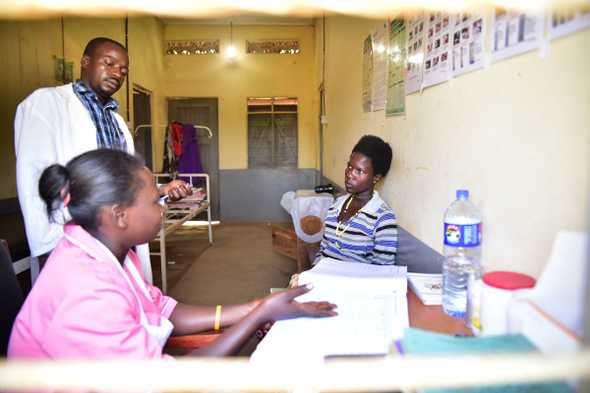 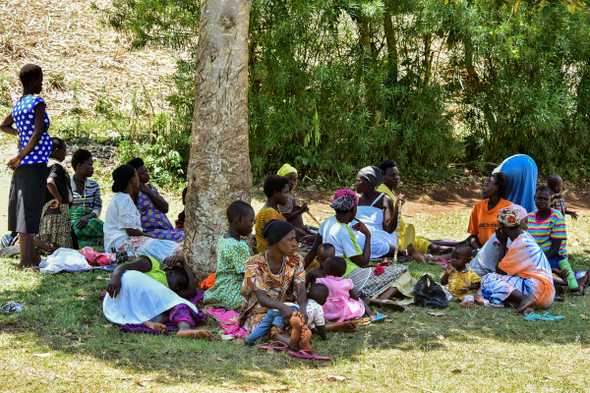 The Kibibi health centre in Budondo sub county in Jinja district in the eastern part of Uganda has its own dedicated bicycle ambulances to bring people for health care. NICHOLAS BAMULANZEKI/AL JAZEERA 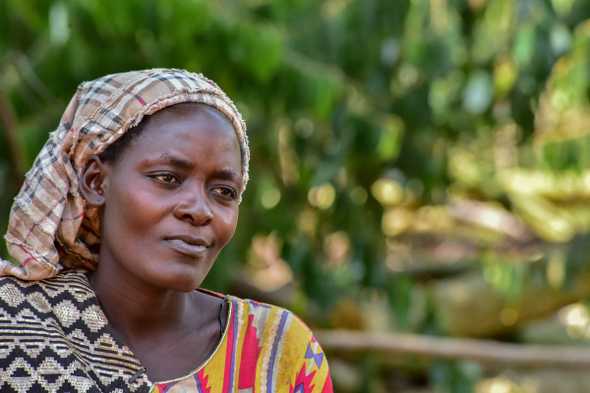 'I fell sick at about 8:30pm and I called the person with the ambulance, I was so weak and my husband was not at home, so I called him and he came and took me to Budondo hospital,' says Theresa Namuddu, 26, seven months pregnant and a mother of two. NICHOLAS BAMULANZEKI/AL JAZEERA 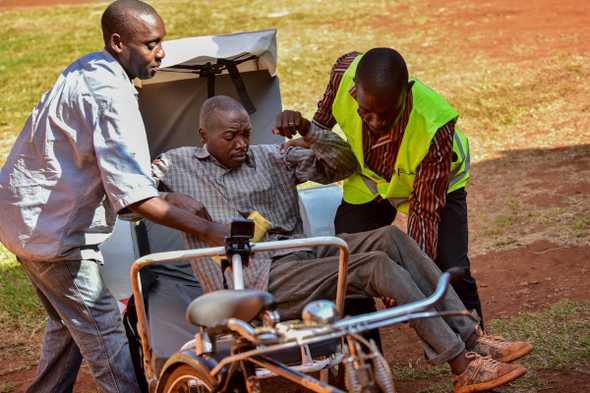 Harid Mukasa, a member of the Village Health Team with another man helps transfer a patient from the ambulance to a ward at Budondo health centre. In Uganda, fewer than 7 percent of patients arrive at health facilities by ambulance. NICHOLAS BAMULANZEKI/AL JAZEERA 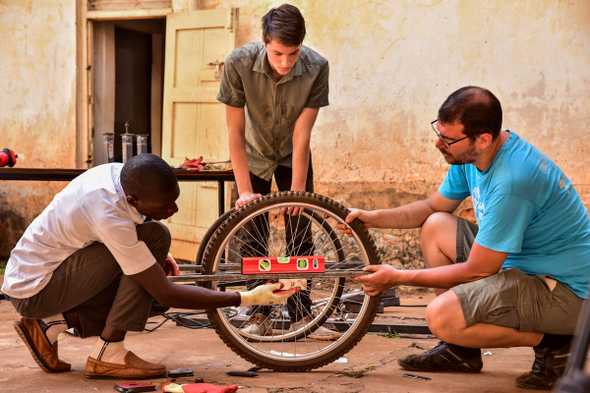 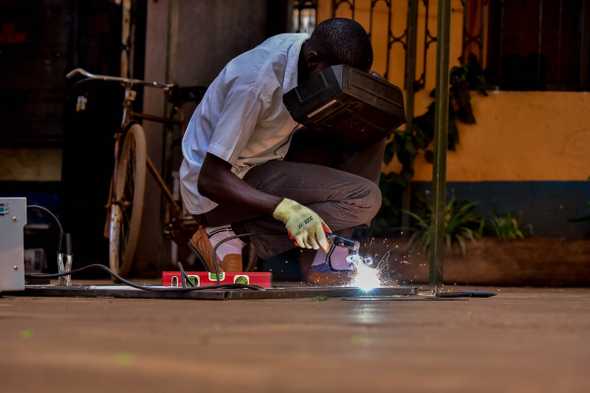 Jeremiah Brian Nkuutu welds an ambulance carrier. The ambulances are constructed in Uganda with locally sourced materials and by locals. NICHOLAS BAMULANZEKI/AL