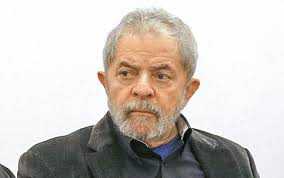 _Brazil's federal police detained former president Luiz Inacio Lula da Silva for questioning on Friday in an investigation of a bribery and money laundering scheme that they said had financed campaigns and expenses of the ruling Workers Party. __Police said they had evidence that Lula received illicit benefits from state oil firm Petroleo Brasileiro SA in the form of payments and luxury real estate. _His detention, part of a sweeping investigation that has ensnared powerful lawmakers and business executives, tarnishes the legacy of Brazil's most powerful politician and the tactics that his left-leaning Workers' Party used to consolidate power since rising to power 13 years ago.

_The evidence against Lula also brings the operation closer to his protegee and successor, President Dilma Rousseff, who is fighting off impeachment and struggling to pull the country out of its worst economic downturn in decades. _Brazil's currency jumped more than 3 percent in early trading as traders bet that the political upheaval could empower a more market-friendly coalition.

_"Ex-president Lula, besides being party leader, was the one ultimately responsible for the decision on who would be the directors at Petrobras and was one of the main beneficiaries of these crimes," a police statement said. _"There is evidence that the crimes enriched him and financed electoral campaigns and the treasury of his political group."

_A spokesperson for Lula did not immediately respond to requests for comment on Friday. _Lula's foundation said in a statement on Friday that his detention was "an aggression against the rule of law and Brazilian society." The foundation, which has consistently denied any wrongdoing by Lula, called his arrest "arbitrary, illegal and unjustifiable".

_Rousseff has also repeatedly denied any wrongdoing. __Workers' Party leaders jumped to the former president's defense, and the Labor Minister Miguel Rossetto said the detention was "a clear attack on what Lula represents." _"This is not justice, this is violence," he said in a public statement.

_In the street outside of Lula's home in Sao Paulo state, television showed his supporters clad in red shirts exchanged chants, insults and even blows with detractors, underscoring the deep political passions surrounding the former president. _Dozens of police arrived to break up the altercations, clearing the street by force.

_As the founder and figurehead of the Workers' Party, Lula's image has been central to huge street protests over the past year, for and against the impeachment of his successor Rousseff, and powerful unions have marched repeatedly in his name. _"Lula is a politician who polarizes Brazilian society," said Rafael Cortez, a political analyst at consulting firm Tendencias in Sao Paulo. "Whether he goes to jail or not, the allegations against Lula will mobilize political forces onto the streets."

_Federal prosecutors who ordered Friday's raids said there was evidence that the former president received funds from the graft scheme at state oil giant Petrobras through work on a luxury beach-side penthouse and a country home. __The former president has said the apartment is not his and it belongs to engineering group OAS, but prosecutors say doormen, OAS engineers and third-party contractors all said the condo was intended for Lula's family. _"The suspicion is that the improvements and the properties are bribes derived from the illegal gains made by OAS in the Petrobras graft scheme," the prosecutors' statement said.

Prosecutors are also investigating payments to Lula by companies involved in the Petrobras scandal that were claimed to be donations and fees for speaking appearances.

_Investigators also turned up evidence that Lula received at least 1 million reais ($270,000) in 2014 from OAS with no apparent legal justification by way of improvements and expensive furniture for the beachfront penthouse in Guaruja. __Investigators say Lula acquired two country estates in Atibaia worth 1.5 million reais, between 2010 and 2014, from businessman José Carlos Bumlai and builders Odebrecht and OAS. __Further evidence shows that OAS paid about 1.3 million reais for transport and storage of "items withdrawn from the Alvorada presidential palace when he left office." _OAS and Odebrecht did not immediately respond to requests for comment.

_Police said they carried out 33 search warrants and 11 arrest warrants in the latest round of the Operation Carwash investigation. Some 200 police and 30 auditors from federal tax office took part. _Brazilian media reported on Thursday that ruling party Senator Delcidio Amaral, a major legislative ally for Rousseff before he was arrested in November, allegedly tied the president and Lula to the scandal engulfing Petrobras in a 400-page plea bargain made with prosecutors.